Hartford, Conn., July 9, 2015 – Governor Dan Malloy announced this week that Southside Institutions Neighborhood Alliance (SINA) is one of a small number of organizations and municipal agencies awarded grants to develop homeownership housing in their communities. SINA was awarded $2.5 million in a highly competitive selection process. Funding for the Affordable Homeownership Program was approved by the Connecticut General Assembly in 2014 under the leadership of Senator John Fonfara (D−Hartford, Wethersfield), a strong proponent of using homeownership to revitalize low income communities.

SINA will use the funds to develop 11 homeownership opportunities in two-family buildings in Hartford’s South End. Each home will be Energy Star compliant, with a three-bedroom ownership unit and a two-bedroom rental unit. The opportunity to collect income from rental units increases the affordability of the homes for prospective buyers.  A total of twenty-two affordable housing units will be created, including one fully renovated and ten newly constructed two-family homes.

SINA is a partnership between the major institutions in the South End of Hartford: Connecticut Children’s Medical Center, Hartford Hospital and Trinity College. SINA has developed 83 affordable rental units and over 60 affordable one- and two-family homes for homeownership in the Frog Hollow and surrounding neighborhoods.

Martin Gavin, President and CEO of Connecticut Children’s Medical Center, hailed the award to SINA as “an important step in improving quality of life for residents of the Frog Hollow and surrounding neighborhoods. We know that the health of our children is influenced by many factors. SINA’s homeownership program contributes to greater resilience for the families that make SINA properties their new homes. Supporting the SINA partnership is one of the many ways that we work in Hartford to safeguard the health of our children.” 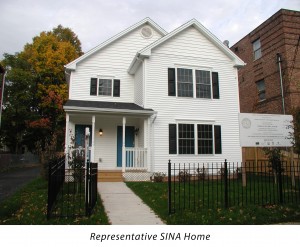 “This is a terrific achievement for the neighborhood,” said Stuart Markowitz, President of Hartford Hospital. “We support SINA and we are proud to contribute to revitalizing the community– through the homeownership programs and support for educational opportunities. Home ownership is the American dream. We are privileged to be able to make this dream a reality for our employees. For 159 years, Hartford Hospital has been committed to improving the quality of life and economic vitality of our community and our staff. A strong healthy community is important to residents, to our staff, our patients and families.”

Joanne Berger-Sweeney, President of Trinity College, applauded the selection of SINA for the grant award, stating, “Trinity has developed important partnerships with community groups throughout the city. Our work with SINA is particularly focused on reinvigorating the community in our own backyard, and we are proud to be a partner in SINA’s Homeownership Incentive Program. These new funds will provide more homeownership opportunities in our neighborhood and further strengthen the South End of Hartford.”

Jane Baird, President of the SINA Board of Directors and Director of Government Relations at Connecticut Children’s Medical Center said that “All of us at SINA are thrilled to receive the award from the Affordable Homeownership Program and we look forward to using the funds to continue our work that aims to improve the quality of life in Hartford’s South End for all those who live, work, play, study and do business here.”

Hartford Hospital (www.harthosp.org), founded in 1854, is one of the largest teaching hospitals and tertiary care centers in New England with one of the region’s busiest surgery practices. It is annually ranked among America’s Best Hospitals by US News & World Report and has been recognized nationally for the quality of many of its programs, including cardiology, urology, cancer, stroke and orthopedic care. The 867-bed regional referral center provides high-quality care in all clinical disciplines. Among its other specialized departments, The Institute of Living, a 114-bed mental health facility with a national and international reputation of excellence, and The Jefferson House, a 104-bed long-term care facility. The hospital’s major centers of clinical excellence include cardiology, oncology, emergency services and trauma, mental health, women’s health, orthopedics, bloodless surgery and advanced organ transplantation. Hartford Hospital owns and operates the state’s only air ambulance system, LIFE STAR.

Founded in Hartford, Connecticut, in 1823, Trinity College (www.trincoll.edu) is an independent, nonsectarian liberal arts college with more than 2,200 students from 44 states and 62 countries. It is home to the eighth-oldest chapter of Phi Beta Kappa in the United States. The faculty and alumni include recipients of the Pulitzer Prize, the MacArthur award, Guggenheims, Rockefellers and other national academic awards. Trinity students integrate meaningful academic and leadership experience at all levels on the College’s celebrated campus, in the capital city of Hartford, and in communities all over the world.