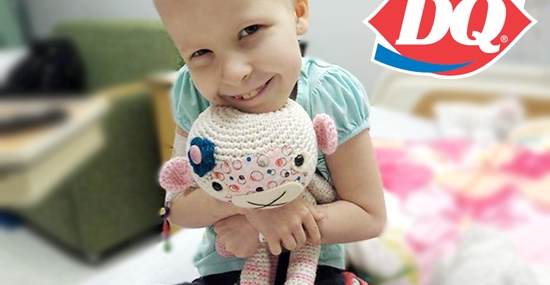 Have a Blizzard® Treat in Honor of Emma

Stop by your local Dairy Queen today to celebrate Miracle Treat Day and kids like Emma. On August 2, participating Dairy Queen® locations will be donating a portion of their Blizzard® sales to Connecticut Children’s Medical Center through Children’s Miracle Network Hospitals.

Emma is an 11-year-old who is described as a vibrant and outgoing girl who loves to dance, paint and conduct science experiments. Little would you know, five years ago her future was unknown.

A few weeks after being treated for strep throat, Emma’s mother brought her to a local emergency room due to a sudden onset, high fever. After an extremely abnormal test result, Emma was transferred and admitted to Connecticut Children’s where she received three blood and plasma transfusions.

Three days later, a biopsy was performed, confirming a parent’s worst nightmare–Emma didn’t have one of the more common forms of leukemia, ALL or AML–she had both. Read more